TAKING ON THE TASK FIRST HAND

Welcome! Sentinel Apologetics is an academically orientated apologetics ministry for the sole purpose in educating the next generation of Christians, by producing content for a scholarly discourse between Christians and non-Christians. The Hebrew word tsaphah appears in Ezekiel 33:1-9, and it translates to mean "Sentinel." It's a descriptive title that Ezekiel was commanded to embody. Centuries later, Paul used the Greek equivalent and writes: "I keep pursuing the goal [skopon] to win the prize of God's heavenly call in the Messiah Jesus." (Philippians 3:14) Paul teaches us that Christians have a mark that is given by the Logos. Thus, Christians are to aim for a future goal, uniting our wills with God, and in faith pursuing the goal that he sets before us. Thus, Christians are to encompass the scientific method, look at topics critically, and maintain a healthy testable model for the Christian worldview.

Christianity and Apologetics: Why They Should Never Meet

The Descent of Master Chief into the Bowels of Halo

Thank God for evolution! It disheartens me to see many Christians today reject evolution because of a straw-man depiction that it's a meaningless mechanistic process. However, the cutting-edge of evolutionary thinking today points to a very different understanding of the cosmos. We now see a universe of nested creativity (atoms within molecules within cells within organisms within planets within galaxies) perfectly suited for life and sentient consciousness (the concept of ne

I came across this fantastic blog post, refuting the YEC model of the patriarch lifespans. Did you know that the genealogy in Genesis 5 is not a literal numerical account of the antediluvian lifespans of Adam to Noah? Instead, a remarkable numerical schema is revealed when the lifespans from Adam to Moses are added together: 12,600 years. This schema has eschatological connotations that relates to the 1,260 days mentioned in Daniel and Revelation. And outside the bible, the f 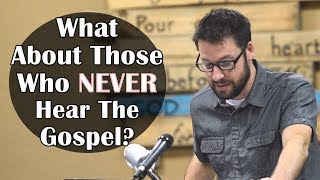 How Does God Approach People Who Have Never Heard The Gospel?

Here's an amazing sermon my friend Mike Winger gave a few weeks ago on how God approaches people who have never heard the gospel. The question is an important one: how do other humans around the world, especially those thousands of years in the past know about the God of Israel? Mike also provides thoroughly fresh insights from Hebrews 11, especially on how Paul (I believe to be the author of Hebrews) speaks about people who existed before Abraham, and yet they had a salvific

Behemoth In Job: A Bull, Not A Dinosaur

Young Earth Creationists like Ken Ham believe that the Behemoth in Job is a sauropod dinosaur (and thus conclude that man lived with dinosaurs). With the latest in ancient Near-Eastern scholarship, here is an apt translation of the passage: Please observe Behemoth, which I made along with you. He eats grass like an ox. Now take a look at the strength that he has in his loins, and in the muscles of his abdomen. His penis protrudes stiffly, like cedar; the sinews of his testicl

Since Jesus’ earliest followers (soon after his death) became convinced that Jesus rose from the dead and appeared to them is (like the crucifixion) as historical as anything can ever be! But, a critical question that should be asked is this: assuming that Jesus remained dead and did not appear to them, where did they get this idea of their crucified leader rising from the dead? Could they ever have conceived of the idea of resurrection before he appeared to them? First, it i

The Mosaic law was as tightly bound to the enmity between God and all humanity as it was to the enmity between Jews and gentiles. When its holy, righteous, and good decrees encountered a humanity under the power of the world, the devil, and the flesh, they served only to reveal the depth of humanity’s rebellion against God and the gravity of the penalty for that rebellion. When Christ died on the cross, he set the law aside, and in so doing, he not only created a new people u

​We are thankful you are here today with us.

If you have any questions pertaining to scientific, theological, or philosophical concepts, feel free to get in touch with us as we look forward to answering any questions you have on the Christian faith.

For questions and concerns please follow the guidelines below so that we may be able to answer your questions more directly:

​Have a blessed day!